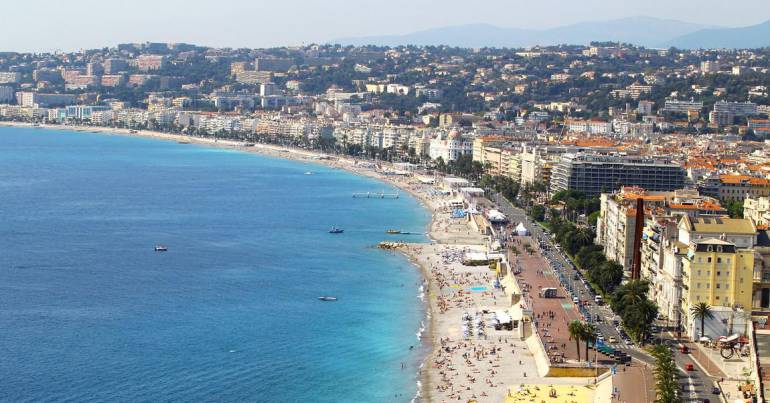 Nice, second largest city in Provence on the Mediterranean shore offers a panel of architectural beauty, flamboyant landscapes where culture rhymes with holiday pleasures, idleness and festive events. One of the many advantages of the city of Nice is its ability to welcome both families with young children and celebrities seeking luxury and prestige for their holiday.

Discover Nice in all of its splendour.

The Old Nice: jump into a colourful world, where ancient architecture is filled with restaurants, shops, workshops and boutiques. Whether you want to have a quiet stroll or succumb to a chic shopping trip, this is the neighbourhood to see!

To get there, walk through the Masséna plaza heading south… At the entrance of Old nice, you will discover the Saint-François-de-Paule street, near the city hall, the Opera House, the beach, and a number of shops. Walk past the Saint François de Paule church, bordering the frères Minimes convent. In the midst of the neighbouring grey houses it is not so clearly visible. Built in the XVIIIth century, it was decorated with the paintings of Hercule Trachel. The majestic front of the Opera House opposing the church offers a charming contrast. (Nice.fr)

The Park of the Colline du Château: Symbolic ruins of the original Greek city, founders of the city of Nice a few millennia ago, the historic richness of this park competes with its landscape appeals which offers magnificent panoramic views as well as enjoyable walks strewn with restaurants, souvenir shops and playgrounds.

Take part in the great events of Nice

Nice is the seaside resort with the biggest musical, cultural, artistic and commercial events.

The Nice carnival is symbolic of the city and is one of the most renowned in the world. It takes places every winter in Nice, in the month of February for two weeks (including three week-ends) and attracts hundreds of thousands of visitors. It is the landmark event of Nice’s calendar.

The Nice fair: Every year in March, the fair sees over 130,000 visitors who come to discover the latest trends and innovations and plan their projects in a variety of fields (housing, leisure, food, crafts…). Close to 1000 exhibitors share 30,000m² of space and offers attendees a route organised around 3 themes which are geographically clearly labelled: Palais des Expositions, Plein Air and Bâtir.

You are already thinking about discovering the appeal of a unique city.

With its modern infrastructures, the Nice Côte d’Azur airport is the second largest airport in France with its 9.6 million passengers, 103 direct destinations and since recently now serves as an air link with China.

Links between Nice Côte d’Azur and the Nice city centre

There are many routes to the city from the airport, whether by bus, cab or train.

You will not struggle travelling within Nice and its surrounding area via road thanks to the  Nice cab service, professional chauffeurs such as HSE Plateform who know the city and the region like the back of their hand, road networks and the French highway system.